A recent family favourite no-fuss, one-tray baked dinner. I created a recipe for this Oven Baked Miso Salmon after discovering that I could buy slabs of boneless salmon online. This Japanese-inspired Asian baked salmon only needs a really good marinade that can be prepared ahead by mixing a handful of ingredients. Chopped potatoes and carrots get semi-roasted first, marinated salmon gets added to the tray and everything gets baked together again. Finally, lots of fresh greens and sesame seeds for a topping and steamed rice on the side. A delicious, full of flavour dinner that everyone loves! 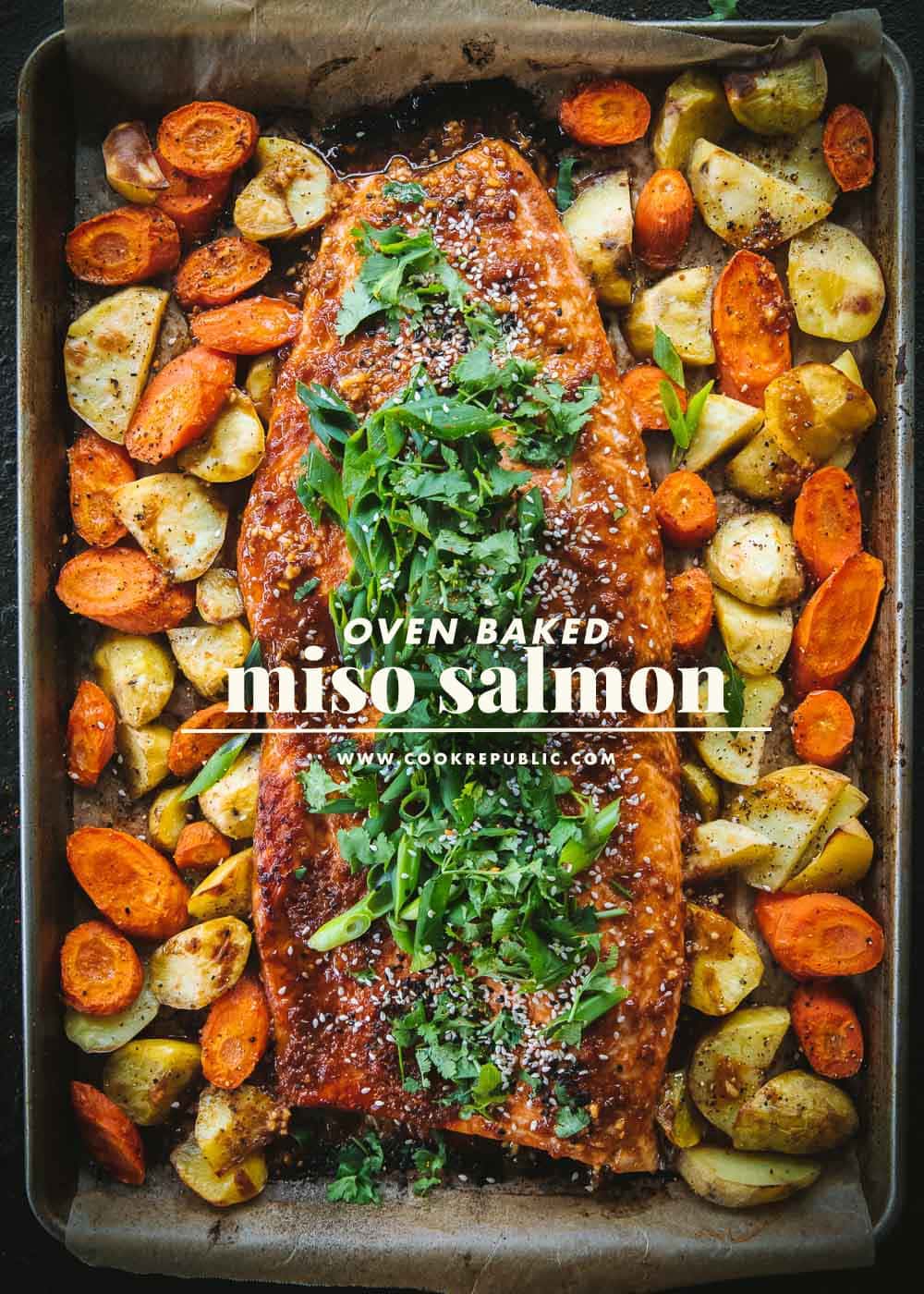 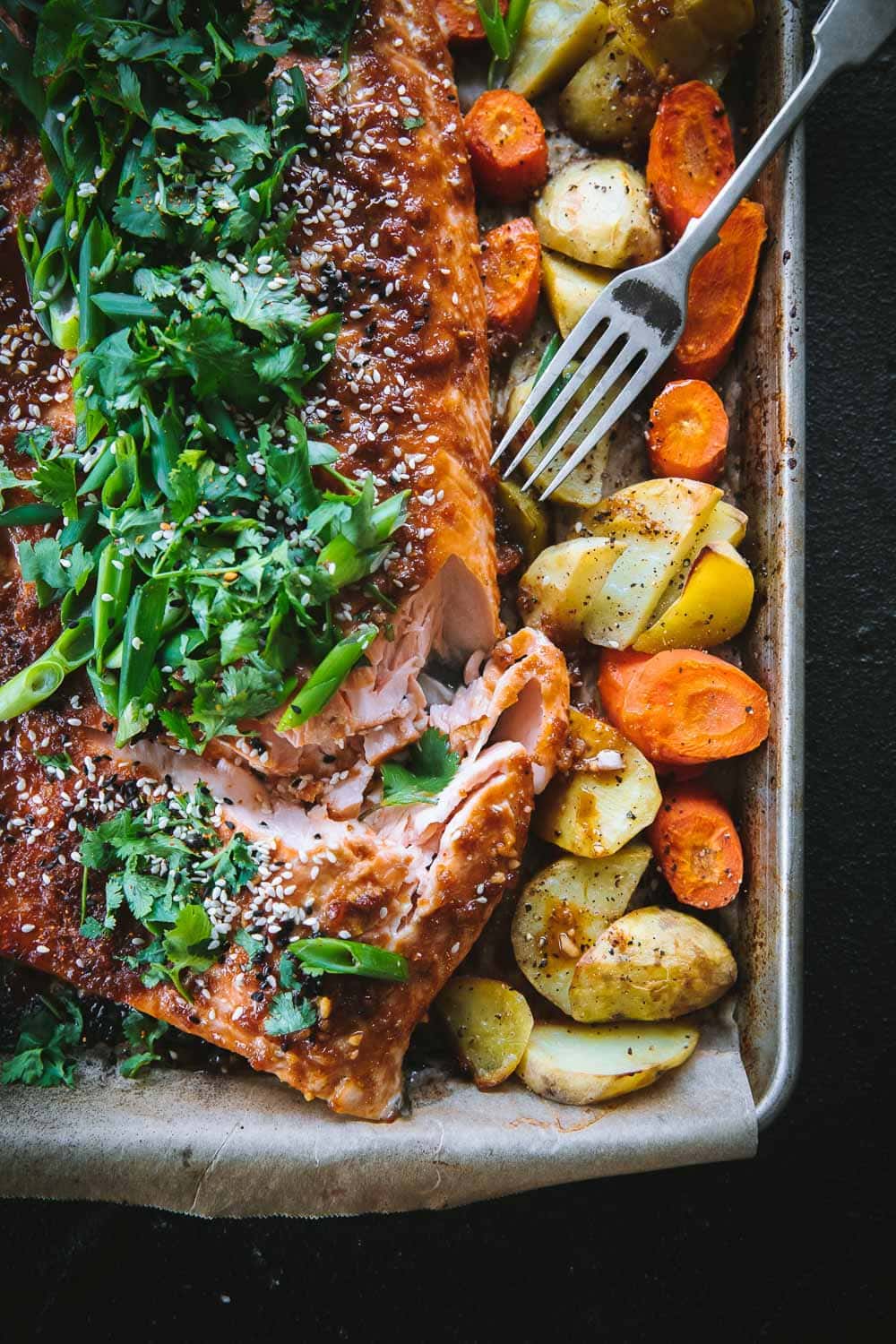 The beauty of baking a whole slab of salmon is that on weeknights it is a hands-off, fuss-free dinner that basically cooks by itself and on special occasions like a dinner party or Christmas lunch, it kicks up things a notch by looking spectacular without much effort. A great dish for sharing.

Buying a whole side of boneless salmon can be a bit tricky as it is not available everywhere. A trip to your local fishmonger or the fresh seafood section at your local supermarket will remedy that problem. I have started buying mine online from Harris Farms or Delish Deliveries. They source it directly from the Sydney Fish Markets and it arrives at your doorstep within a day. The weight can vary sometimes but more often than not, it is a whopping 1.2kg of a whole side of salmon with the skin on. My recipe for the marinade has been tested for 800g, 1kg and 1.2kg slabs of salmon. I have given slight adjustments to the marinade in my notes for different weights of salmon. 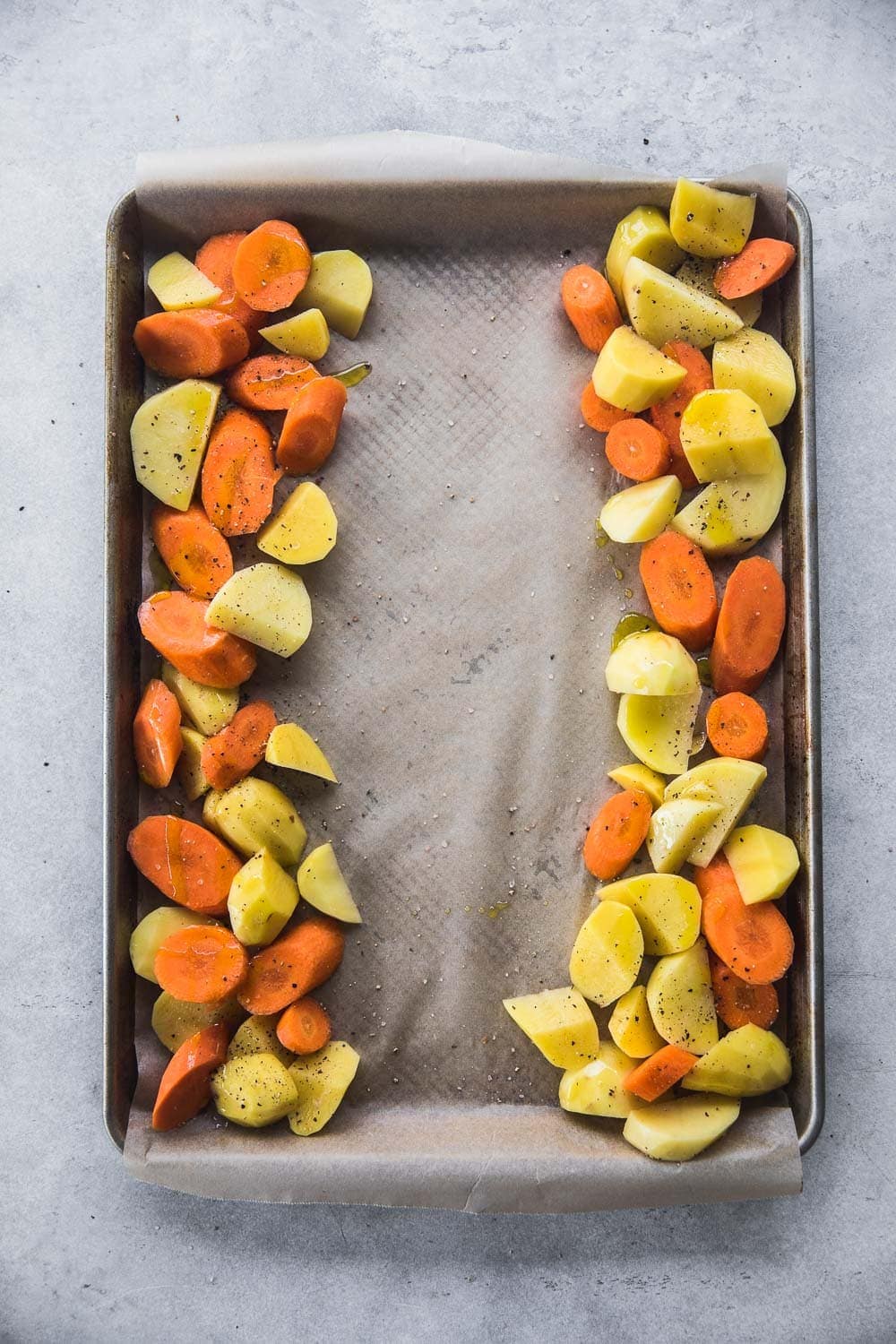 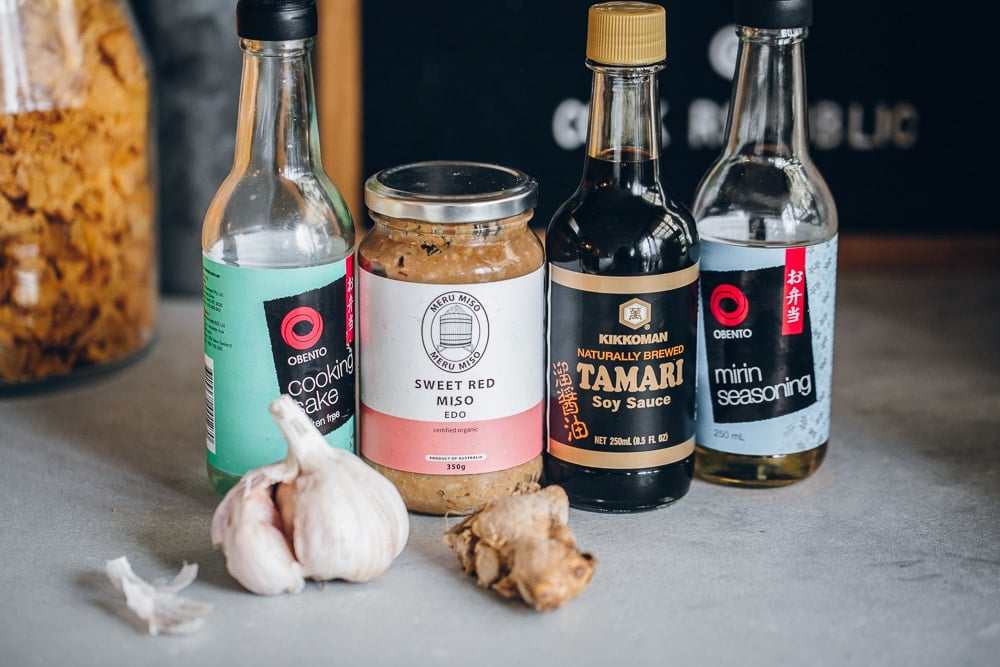 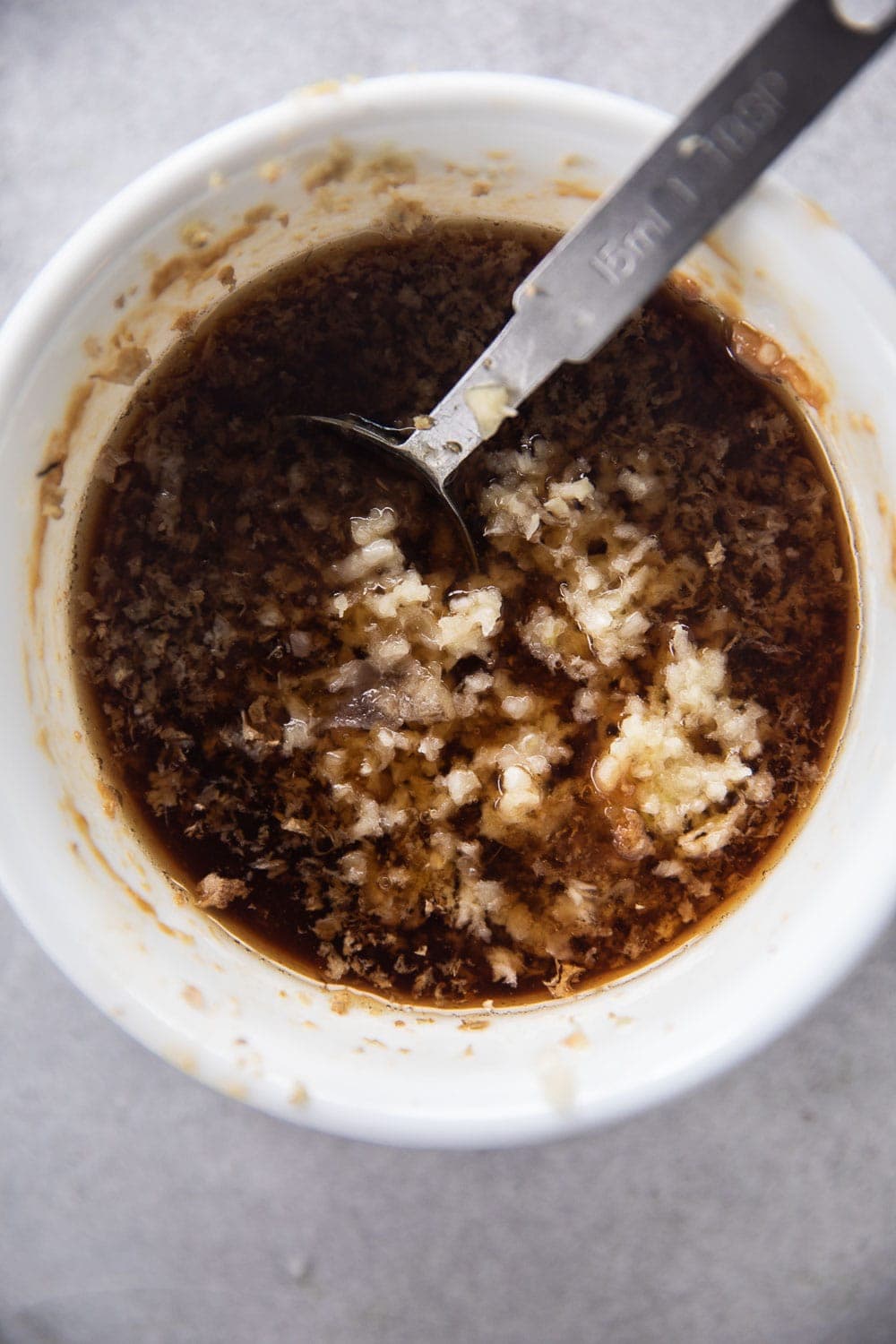 I must admit, I used to find cooking a whole of any kind of fish very daunting. There is the eternal dread of overcooking the fish. But fret not. My recipe is foolproof and cooks the salmon to perfection. In fact, if you make it once you will want to make it every week because it will be the simplest dinner you cook in your kitchen.

This recipe is inspired by beautiful Japanese flavours. If you notice, most Japanese rice dishes are very simple. The rice is simply steamed without any salt to allow to soak up the intense flavour of the marinade slathered protein on top. The dishes are often dry (i.e. without sauce) but don’t feel dry when you are eating. They feel juicy, tender and packed with big umami salty-sweet flavours with just enough sauce coating the mains.

The beautiful marinade for this dish is an ode to that Japanese style. It is big in flavour, too salty even on its own but once it gets slathered on the fish and bakes, it crosses over into perfection. You can add any veggies of your choice but I find potato and carrot add a nice heft to the dish and go really well with salmon. And finally, lots of thinly sliced spring onion and coriander for that fresh lift at the end. 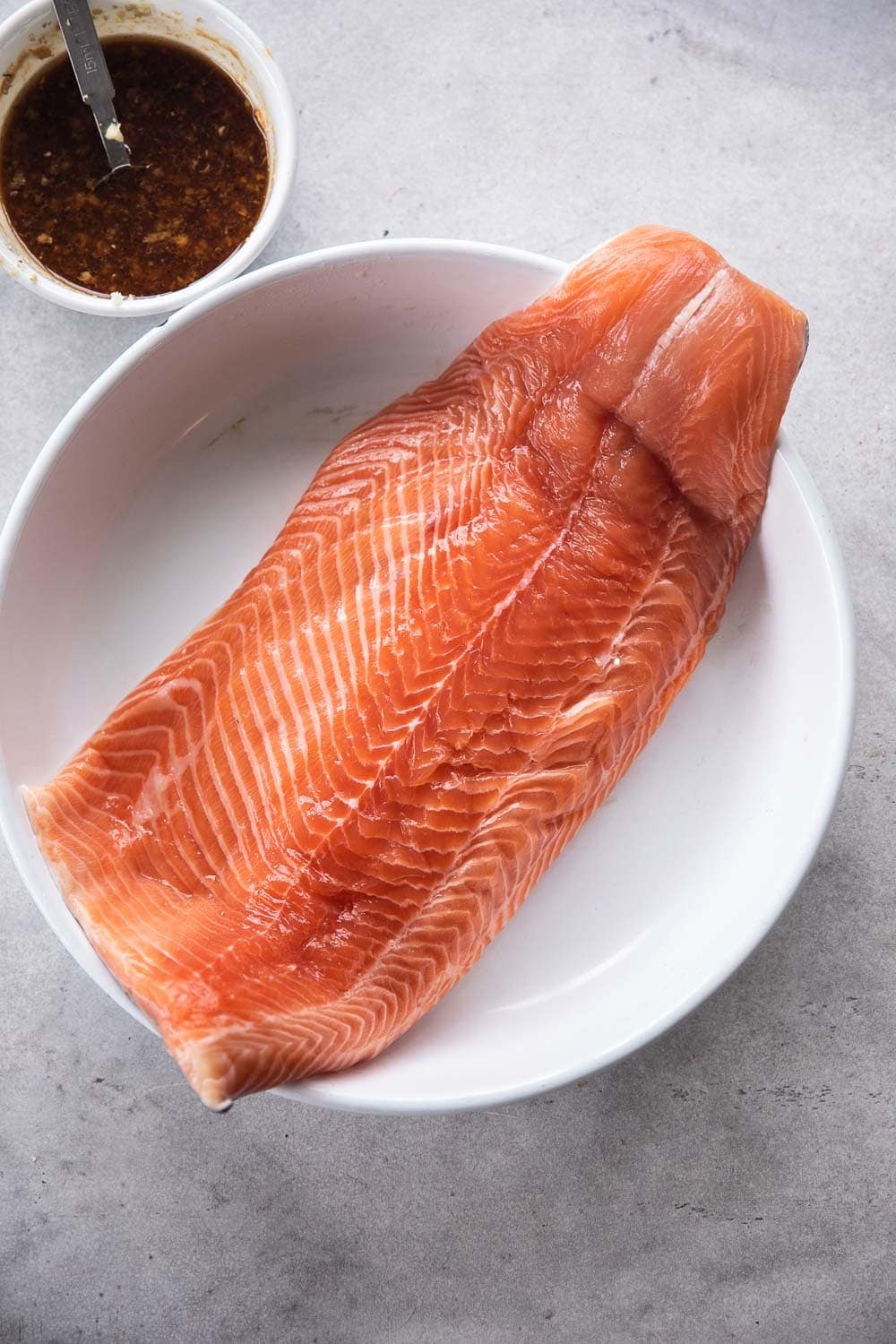 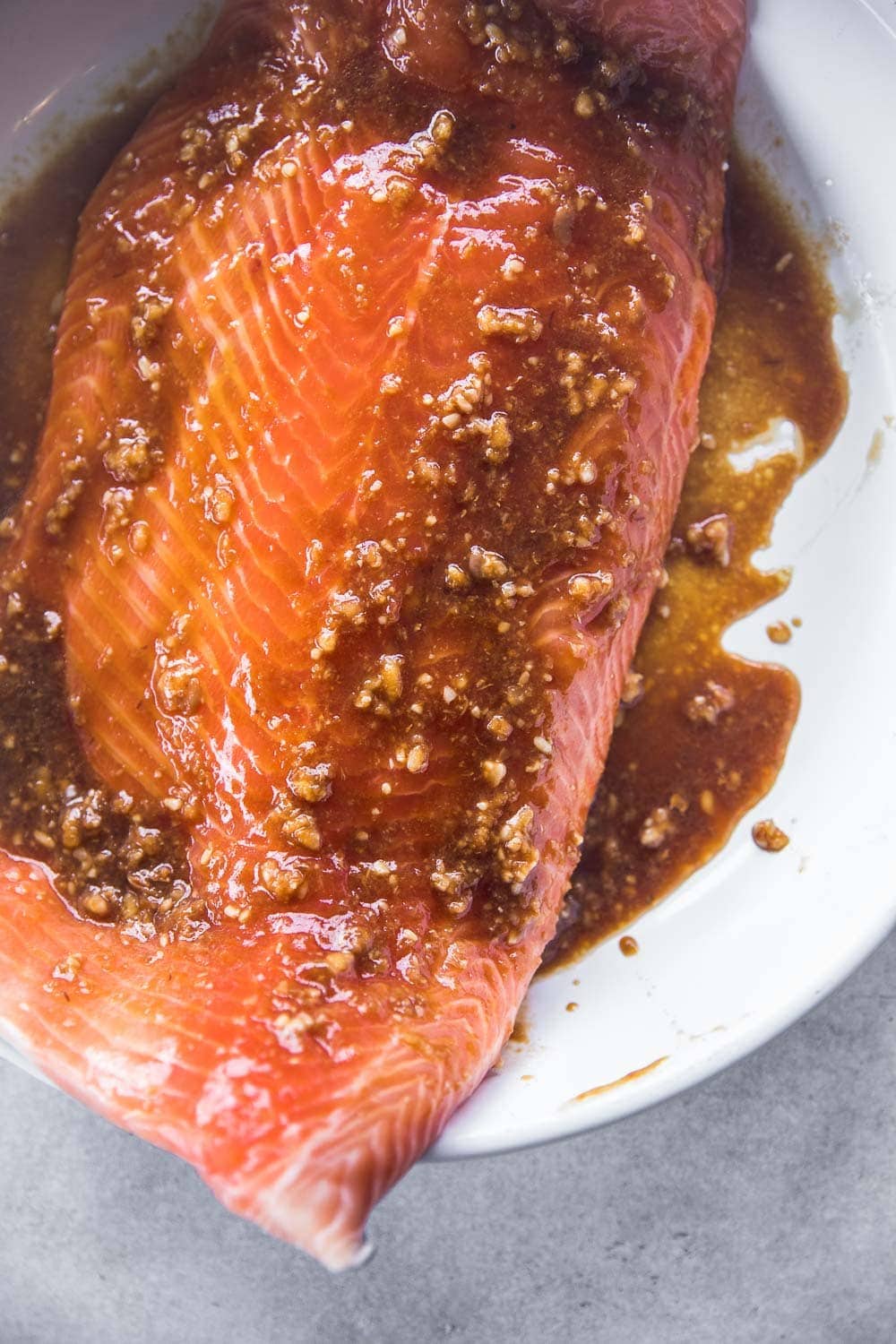 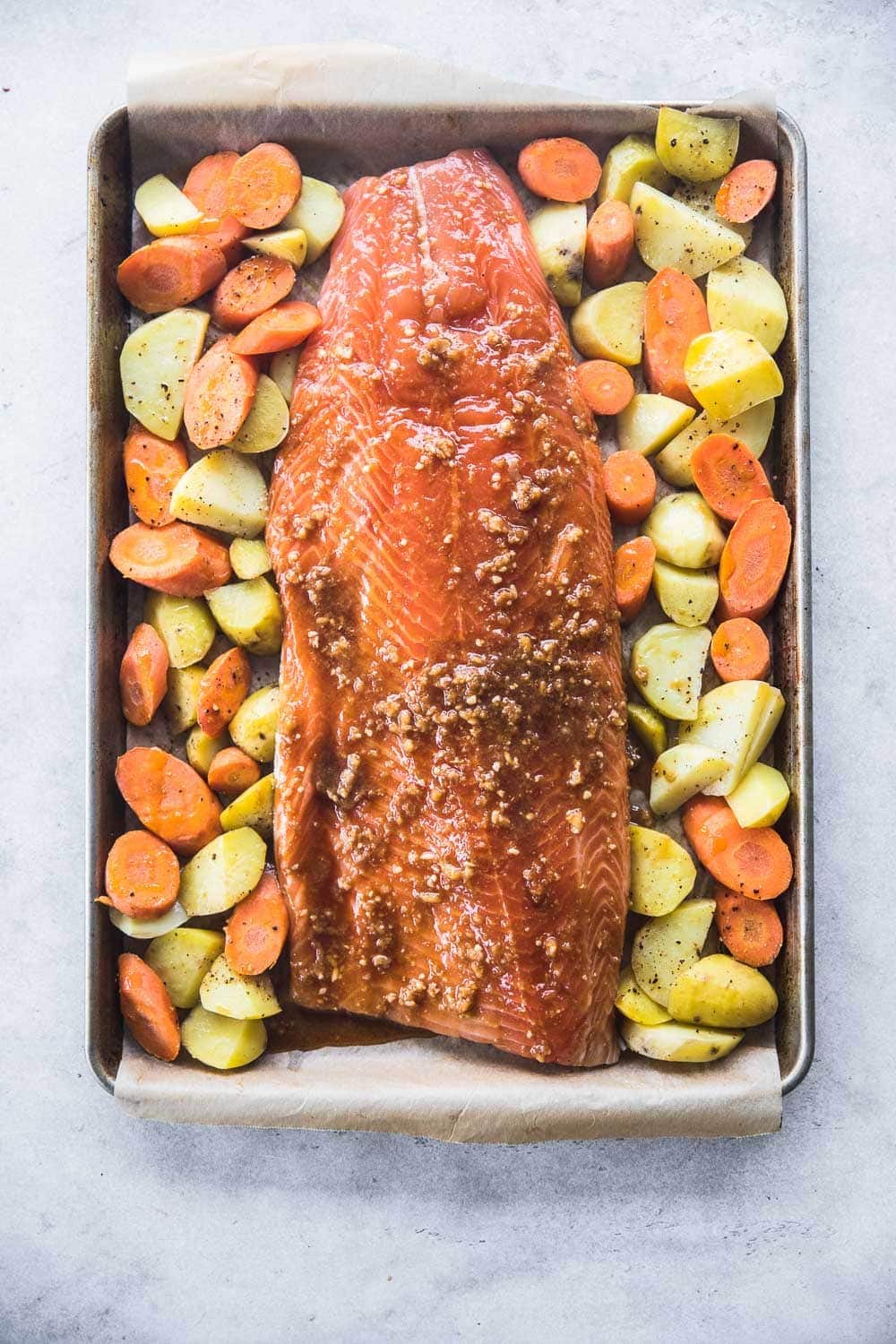 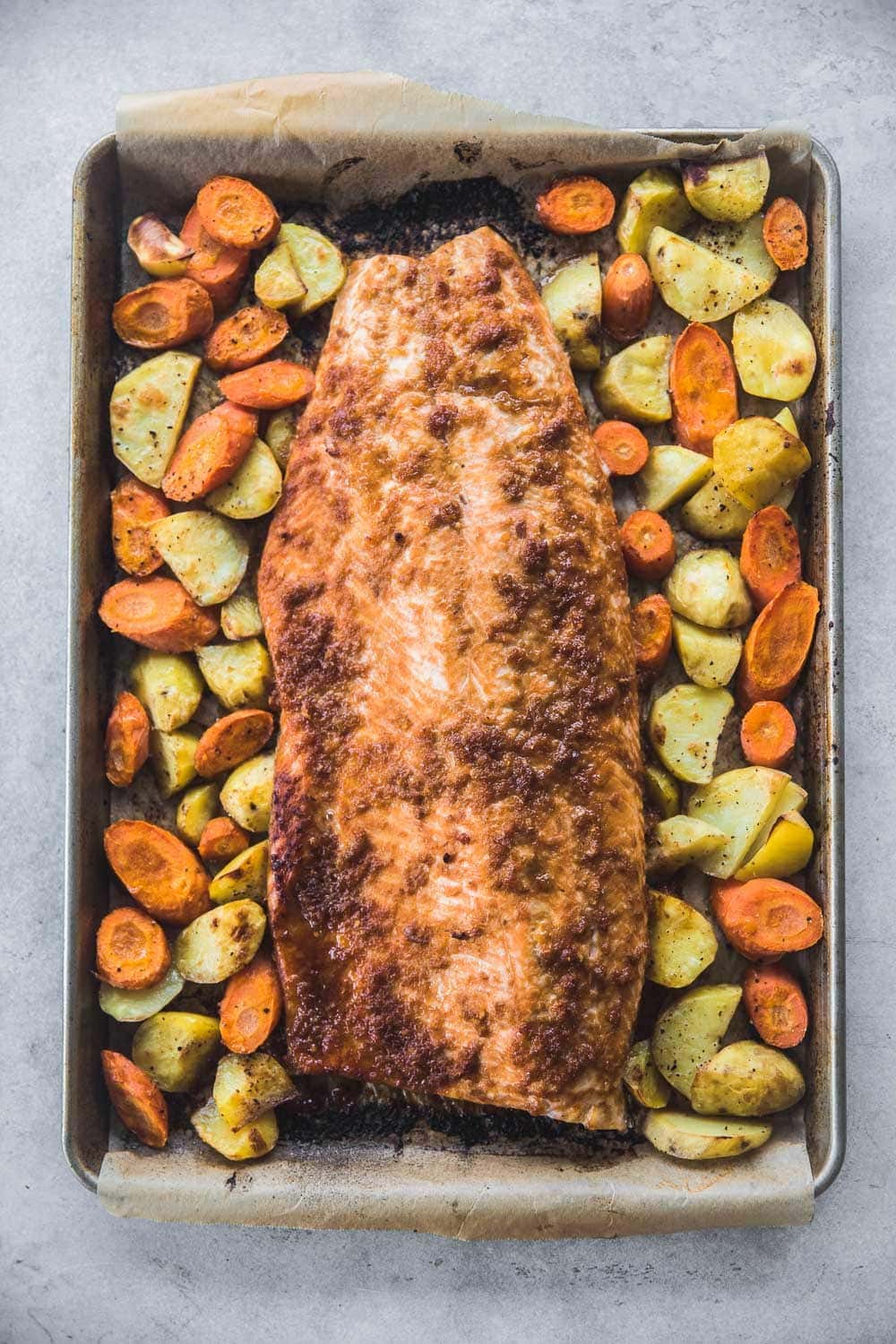 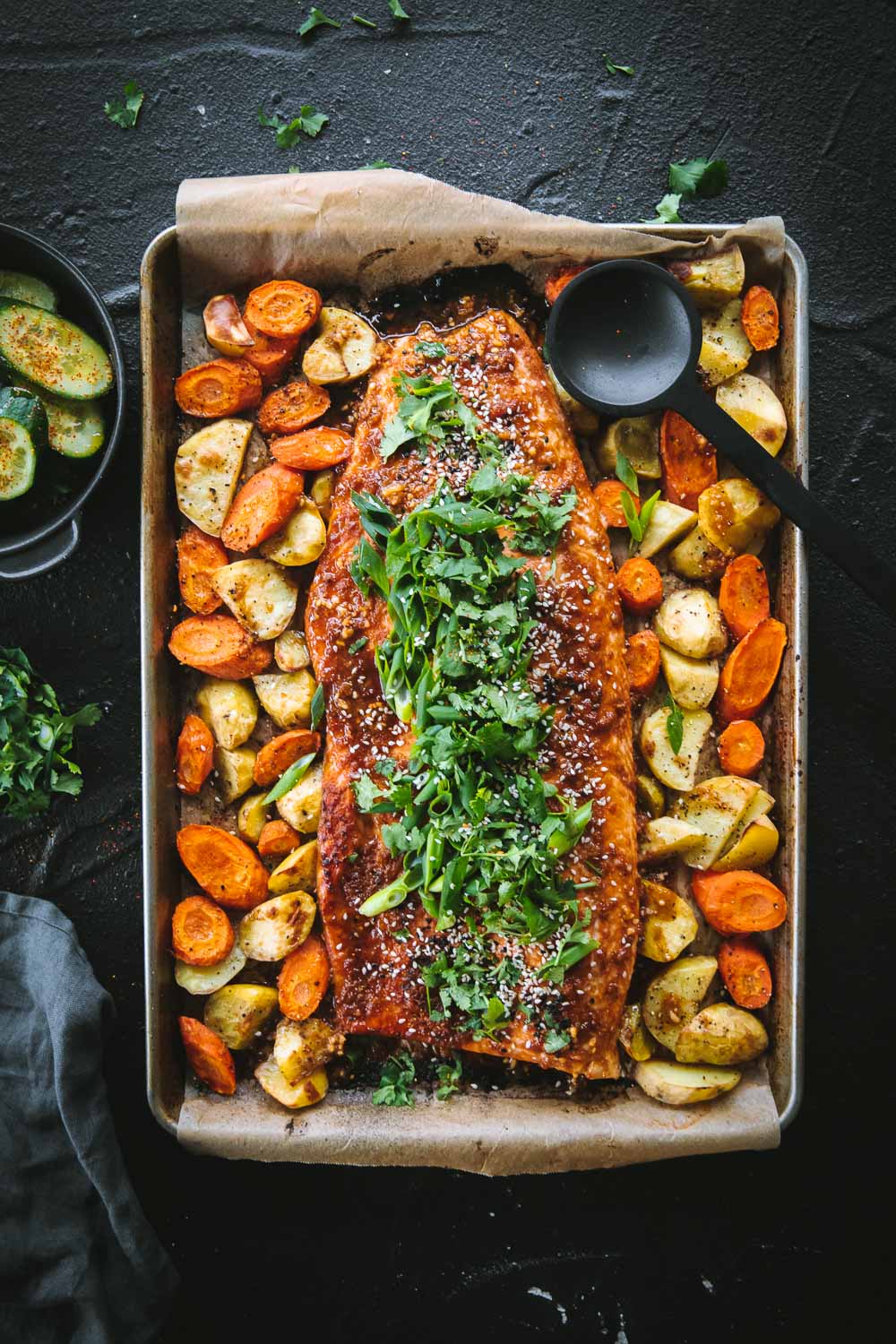 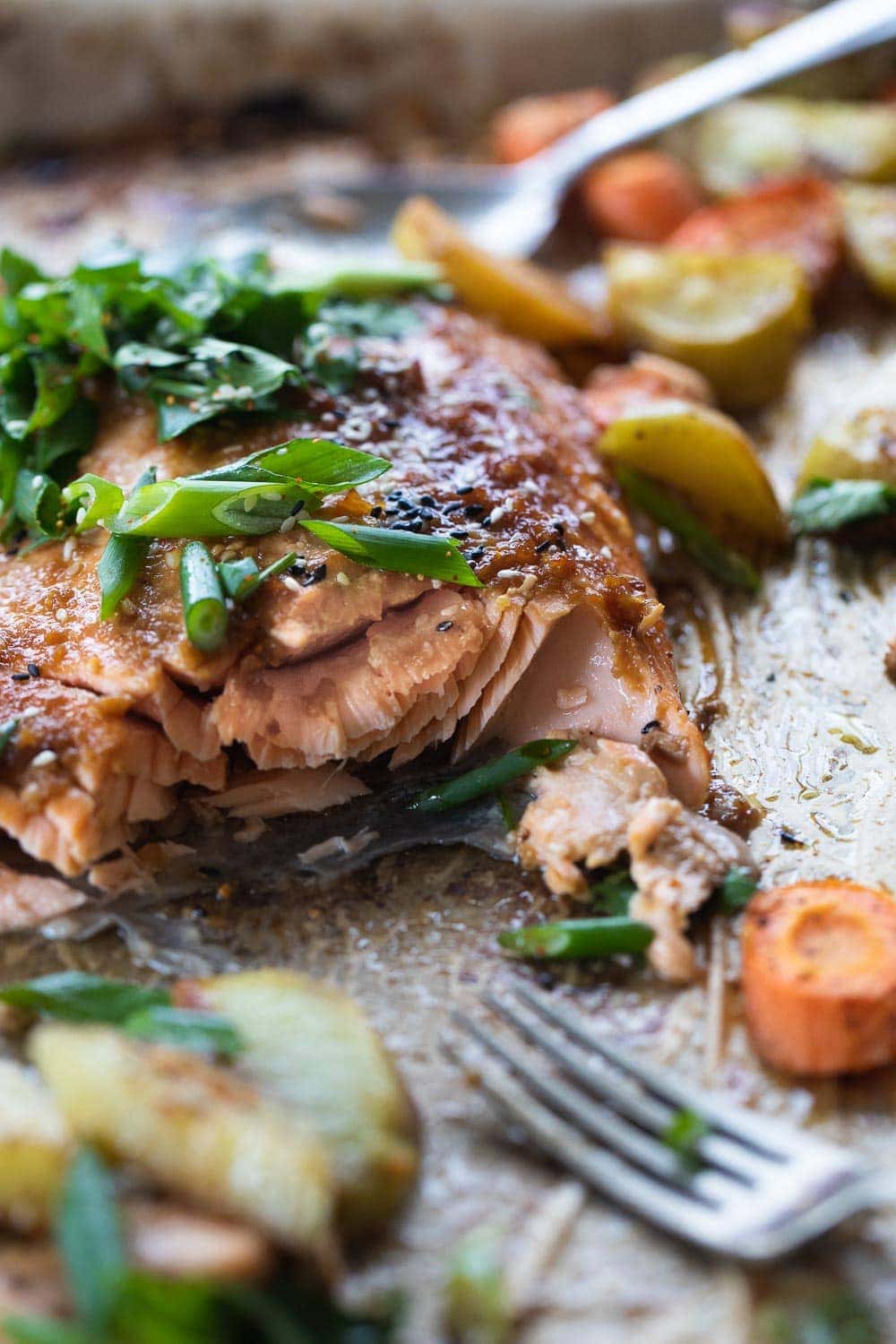 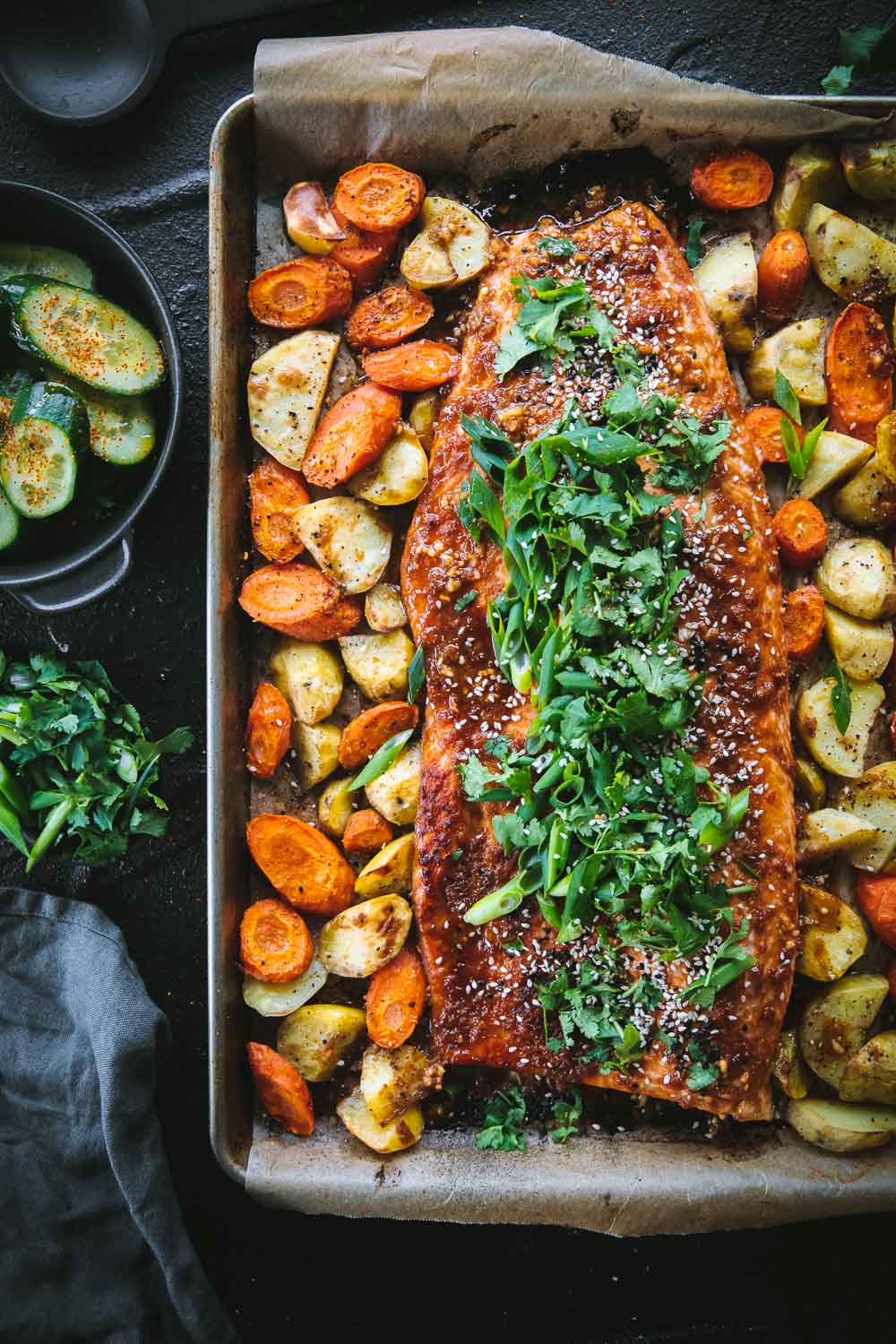 For an 800g slab of salmon, reduce miso paste and soy sauce to 2 tablespoons each. After adding the marinated salmon to the tray of semi-roasted veggies, adjust cooking time to  16 minutes at 200°C (180°C fan-forced) with a further 2 minutes at a higher temperature.

Although this recipe is fool-proof, the end result depends on the thickness of your salmon slab. If the salmon slab is thicker than you will need slightly more cooking time. 1-2 minutes extra should suffice. If after cooking, when you cut into the salmon you find it too pink, just heat it in the microwave for 1-2 minutes and it will cook right through.

Did you make this recipe?